Through these efforts, The Kirk Gibson Foundation has raised over $2 million dollars to date, investing funds in organizations who work together, build awareness, and share data with others.  We sat down with Kirk Gibson as he shared with us his life, his legacy and the new battle he’s facing against Parkinson’s Disease. “I remember Sparky Anderson telling me you’re going to have journey’s in your life, some will be good and some will be bad. But if you ever become a World Champion it won’t be worth it if you don’t do it the right way. And you make sure you give back, wherever your journey takes you.  That’s kinda’ where I’m at now with the whole deal.” “I’ve got Parkinson’s Disease…it’s a bit of a curveball or knuckleball or whatever you want to call it. And it’s not easy to hit that ball, but that doesn’t stop me from swinging. I’ve had many surgeries over my life and career. Do I now know that it was Parkinson’s?  I don’t know that, but I guess in the end it was Parkinson’s” “It’s not a death sentence, you can fight back. The whole Parkinson’s thing, is there more to it? I’ll never know, but I’m engaged in it and I am committed to touching as many people as I can that have hope.” Kirk Gibson leads off base during a 1987 game against the Oakland Athletics. (Photo by Otto Greule Jr./Getty Images) 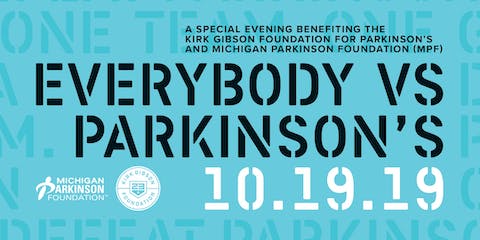