Bloomfield Twp. – With trade rumors surrounding Lions QB Matthew Stafford, some question if he’ll be playing this season. As reported in a NFL.com article, Stafford told ESPN he loves being a Detroit Lion and leading the team.

However, with the rumors, the Stafford’s are selling their $6.5 Million dollar house in Bloomfield Twp. The home boasts 5 beds, 7 baths, and is over 7,700 Sq. Ft. with 441 feet of frontage on Long Lake.

Kelly Stafford wrote on Instagram they no longer prefer to have a pool or live on a lake with a fourth child on the way. According to MliveShe wrote, “No speculation is needed,” Kelly Stafford said. “We’re about to have our fourth child and I personally do not want to live on a lake or have a pool with four children under the age of a little over 3. So that is the reason that it’s on the market. It makes us super sad. That house has been incredible. We’ll never have a house like it. So it is a super sad thing, but it just makes us feel better knowing that there’s no real dangers of having tiny ones running around all the bodies of water. So, that is the reason.” 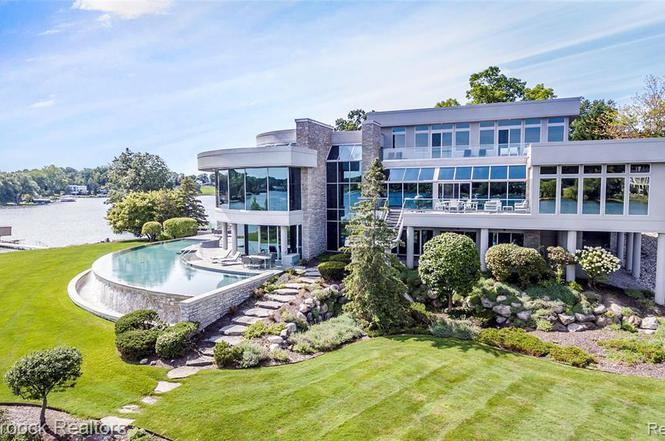 As the commercials say “But wait! There’s more!”. MLive reports the home also features five fireplaces, a glass elevator to the home’s three floors, and an indoor half basketball court featuring flooring from the Pistons when they played at the Silverdome.

After a busy Sunday on the field… if you’re lucky enough to be the buyer of this palatial home, you can unwind with a 625 bottle wine cellar while relaxing in hot/cold tubs, sauna, and the largest infinity pool in Michigan.

With what will be his 12 season with the Lions, the 32-year-old Stafford has had two back injuries that have affected him, missing the last eight games in 2019. Now he says he is fully healthy and ready for 2020. Below are some more pictures from their $6.5 Million Long Lake home.

Credit: Redfin.com – The 1.27 acres property sits on a peninsula on Long Lake.

Credit: The dining and living areas have lakeside views.

Credit: Redfin.com – One of 7 bedrooms.

Credit: Half basketball court with a real Detroit Pistons hardtop.

Credit: Redfin.com – Hot and cold tubs lead to a sauna.