CBS Detroit – There’s a war on for the automotive offroad market. As Ford has made it known they intend to take away Jeep’s domination of the market with the new Ford Bronco set to unveil tonight.

Jeep right now has dominance in the off-road market with their Wrangler and Ford is trying to steal Jeep’s dominance by revealing the new Bronco. Jeep® has followed suit by trying to steal some of the thunder by unveiling their Wrangler Rubicon 392 concept just hours before the Bronco unveiling. The new Wrangler concept packs a 6.4-liter, 392 cubic-inch V-8 Hemi, producing 450 horsepower and 450 lb.-ft. of torque. It does 0-60 in less than 5 seconds, and one might expect it should have good towing capacity with that kind of muscle. 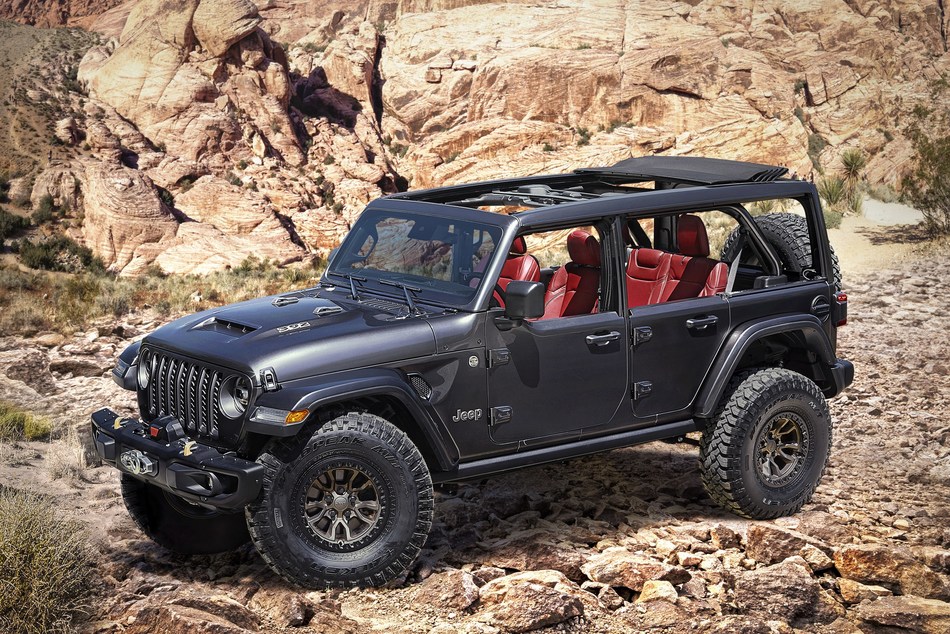 Jeep has taken that extra Hemi power and matched it with Dana 44 axles, full-time two-speed transfer case, electric front-and-rear-axle lockers, 37″ mud-terrain tires, and a 2″ factory lift kit. Plus a two-mode exhaust that gives that Hemi sound at the press of a button. The power of the Hemi is managed by an 8-speed transmission with plenty of low-end torque and a 3.73 gear ratio.

This new concept also comes after Jeep released a version of the Wrangler with an optional 29 MPG EcoDiesel, which produces 442 lb.-ft. of torque. While the new Wrangler Rubicon 392 is a concept to gauge consumer excitement, it’s unclear if Jeep will offer this in the Wrangler line-up.

In a recent press release, Head of Jeep Brand – FCA North America, Jim Morrison said, “Jeep Wrangler enthusiasts have been asking us for a Wrangler V-8 and our new Wrangler Rubicon 392 Concept proves that we have the ability to make that happen,”. He added, “From the recently introduced 29-mpg Wrangler EcoDiesel to our award-winning Jeep Gladiator, and the upcoming Wrangler 4xe plug-in hybrid electric vehicle, Jeep is clearly listening to its customers. We are anxious to gauge their reaction to this new Wrangler Rubicon 392 Concept, a vehicle that delivers an incredible and unmatched level of fun-to-drive performance and capability, on- and off-road.”

While Ford is very secretive on the new Bronco, some think the new Bronco might borrow styling-cues from the Bronco R race prototype that was unveiled at the Baja 1000 in 2019. It was entered to debut on the 50th anniversary of Rod Hall’s Bronco that won the race in 1969.

While much is being kept tight for now on the new Ford Bronco, it’s not clear what will be under the hood, but with Ford has been doing with the F-150, it might be very well probable to see an Ecoboost V-6. We will have to wait and see tonight for those details. In the meantime, off-road enthusiasts might be the ones who gain from this competition to be king of the hill in the automotive off-road market.

© 2020 CBS Broadcasting Inc. All Rights Reserved. This material may not be published, broadcast, rewritten, or redistributed. Information from The Detroit Free Press contributed to this report.