CBS Detroit – “Now batting for Toronto, number 27, Vladimir Guerrero Jr.” could be a sound heard over the PA at Cooley Law Stadium in Lansing.

In an article from The Detroit News, the general manager for the Lansing Lugnuts, Tyler Parsons extended an invitation to the Toronto Blue Jays to play there 2020 home games here in Michigan.

The Toronto Blue Jays are in a predicament right now that they cannot play any games in Canada, as the Canadian government in Ottawa and has shut down the U.S. – Canada border to just essential people with business. So no American MLB teams are allowed into Canada to play there. Plus the City of Toronto is not allowing them to use their facilities because of travel restrictions.

The Lansing Lugnuts is a Blue Jays Class-A farm team that has a formal relationship in developing talent for them. Lansing Lugnuts General Manager Tyler Parsons wrote on Twitter Wednesday night, “We have let the Toronto Blue Jays know we would be available and willing to work with them at Cooley Law Stadium should it become an option for their 2020 season,”.  He told the Detroit News, “We’ve enjoyed a long affiliation with the Blue Jays and are committed to helping them in any way we can, whether it’s this year or any year.” 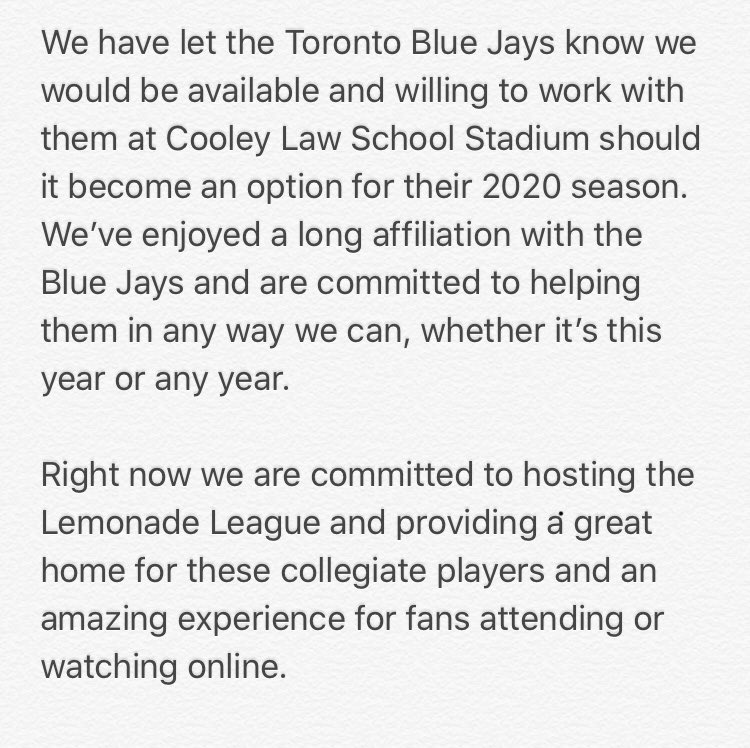 As of right now, the Blue Jays are set to kick-off their major league season with a game against the Tampa Bay Rays tomorrow night at Tropicana Field, and it’s reported that as of now they still don’t have a place to play their home games. There is talk however they are discussing options with the Baltimore Orioles about an agreement to share Oriole Park at Camden Yards.

According to CBS Sports, they did have an agreement to play at PNC Park in Pittsburgh, PA, but the Pennsylvania State government and the Pennsylvania Department of Health shut that deal down.

The Blue Jays, while they would prefer to play at an MLB park, given the infrastructure is already in place to support an MLB team is already there, they are also considering their AAA team in Buffalo, The Bisons. Which would be a shorter commute for them just on the other side of Lake Ontario. Other options that are also up for consideration is their spring training park in Dunedin, FL; but both the areas around Buffalo and Dunedin are experiencing a surge in COVID-19 cases which could complicate possible plans in those regions. Credit: Shutterstock.com | Susan Montgomery – Cooley Law Stadium in Lansing, MI. Home to the Lansing Lugnuts. They are affiliated with the Toronto Blue Jays, as a class A farm team.

Cooley Law School Stadium is larger than most minor league parks in its league seating about 11,000 people and has made improvements to its locker rooms, facilities, and playing surface… which is a big factor for MLB teams. The Lansing State Journal also reports it’s close to a full-service hotel used by NCAA college teams as well as conference and event centers.

Governor Whitmer hasn’t put district 5 of Michigan which is the Lansing region into Phase 5 yet, which would allow sporting venues to have crowds as large as 500 people. Currently, Lansing is in phase 4 which prohibits sporting events and large gatherings. So if the Blue Jays could play there, it would be empty seats for now.

As of now, the Lansing Lugnuts are currently having games for the Lemonade League in place of their minor league season being canceled. The Lemonade League is headed by Oakland University coach Chad Roskelly and other college coaches. The games are being played during July and mid-August.

MORE NEWS: Here’s A Look At Weekend Construction In The Metro Detroit Area

© 2020 CBS Broadcasting Inc. All Rights Reserved. This material may not be published, broadcast, rewritten, or redistributed. Information from the Detroit News and the Lansing State Journal contributed to this report.