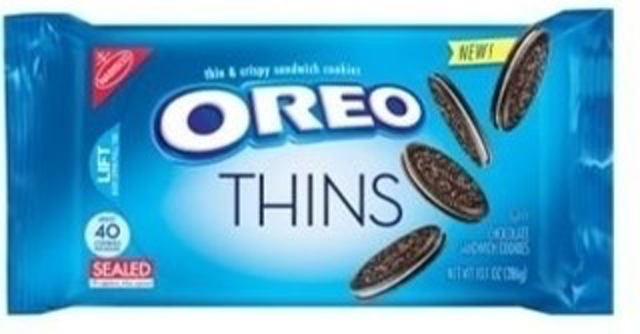 Does this Oreo make me look fat?

For those snackers who would prefer a still scrumptious but slightly thinner version of “milk’s favorite cookie” — something could be coming soon to store shelves.

According to an (unfortunately) unconfirmed report by junk food reviewer The Impulsive Buy, “Oreo Thins” — with a slimmed down chocolate wafer on each side of a thinner layer of creme filling — will be released in the U.S. sometime this month. They’ll reportedly come in 10.1-ounce packages, 40 cookies to a package, available in three varieties: original, mint, and Golden.

Apparently these skinnier Oreo snacks have been available in China for some time due to a preference there for “lighter eats.”

There’s no nutrition information available just yet, but it’s safe to assume you’d be able to enjoy a good handful of these bad boys for the same fat/calorie “price” as just a few traditional Oreos.

What to you think? Does the idea of a slimmed-down Oreo interest you?

For those who would instead prefer something bigger, there’s always this: