CBS Detroit – Nasa’s Mars Rover Perseverance is about to land on Mars around 3:55 EST on Thursday. The journey which started in July 2020 and covered a 293-million-mile journey to the red planet is about to set down. Nasa is live streaming the event as it happens, because of the extreme distance there is an 11-minute lag for data to return due to the time it takes to send data at the speed of light.

As the rover nears Mars, the onboard computers will take over executing over 500,000 lines of code as it attempts to land autonomously. All the while sending back HD 4K video. However, because of the extreme distance, there is an 11-minute lag for the data to return due to the time it takes to send data at the speed of light at 8 bits per second… or about half the speed of a dial-up internet connection. So NASA engineers at JPL are calling this descent “seven-minutes of terror”. 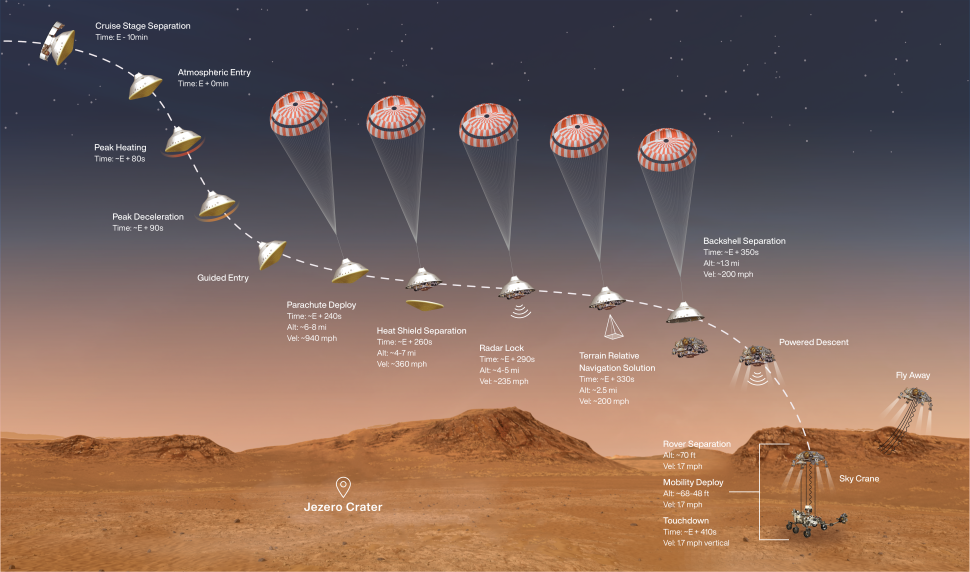 To date, the Perservernace rover or “Percy” is NASA’s largest and most up-to-date rover which is anticipated to gather key data in the search for evidence of life on Mars. It will land in the Jezero Crater, which scientists think it used to be underwater. They hope to find microscopic life fossilized in the rocks there. To search for this, the rover is equipped with a robotic arm with a coring drill that will extract samples from the rock. These samples, the size of a piece of chalk, will be stored within the rover. Which after enough samples are taken they will be left at a predetermined location so that a future mission to Mars can retrieve them and bring them back to earth for further study.

Once the craft is about 7 miles above the surface of Mars, a 70.5-foot wide super-sonic parachute will deploy to slow its descent. Then the heat shield will drop away, giving onboard computers and engineers at JPL a view of the surface the rover will use its Terrain-Relative Navigation system to fin a landing spot. As Perseververnace descends, a rocket-powered “sky crane” will lower it gently to the ground.

Along with a coring drill to take samples, Percy has other instruments to gather key science data. One of those instruments is a drone with rotors spanning about 4 feet to fly in the thin Martian atmosphere. The solar-powered helicopter will fly on its own and is equipped with two cameras in color and black and white gathering imagery of the area to help the rover traverse the terrain and provide data on building drones for future missions.

Percy also has a Mastcam-Z panoramic stereoscopic camera that can zoom. It will help in the operations of the rover and the geology of the planet. The Mars Environmental Dynamics Analyzer (MEDA) is a sensor array that gathers data like temperature, wind speed and direction, barometric pressure, relative humidity, and dust shape and size. the Mars Oxygen ISRU Experiment will try to make oxygen from carbon dioxide in the atmosphere. The Planetary Instrument for X-ray Lithochemistry (PIXL) is an X-ray fluorescence spectrometer with a high-resolution camera to determine the fine-scale elemental composition of Martian surface materials. It also contains a ground-penetrating radar to examine the geologic structure of the subsurface at high resolutions. Scanning Habitable Environments with Raman & Luminescence for Organics & Chemicals (SHERLOC) is a spectrometer to provide fine-scale imaging and use an ultraviolet (UV) laser to determine fine-scale mineralogy and detect organic compounds. Finally, a SuperCam will provide imaging, chemical composition analysis, and mineralogy.

2021 CBS Broadcasting Inc. All Rights Reserved. This material may not be published, broadcast, rewritten, or redistributed. Information from Space.com and Nasa.gov contributed to this report.